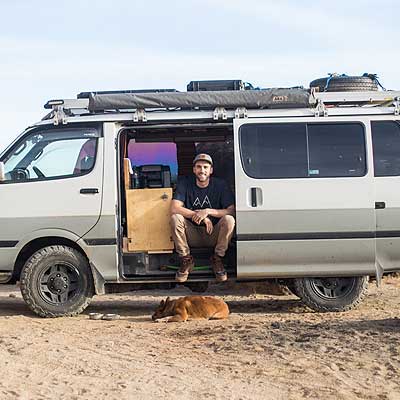 Where are you from?
I was born and raised in British Columbia, Canada but I currently live and work near the small town of Vermilion, Alberta, Canada.

What's your work?
I earn most of my income primarily from being a farmer (heavy machinery operator) half of the year, but I make some money as a photographer and sometimes as a videographer.

What's your passion?
Exploring. Since I was a kid I've always had an explorer's heart and drive. I become giddy and highly inquisitive when I travel to a place I've never been, especially where there are no cities or people around. I seek wild places, mostly.

Favorite place traveled?
That's a very tough question because I thoroughly enjoy most of the places I go to. If I had to narrow it down to two places, the Yukon Territory, Canada and Nevada, USA. Both places have great open spaces, lots of mountains and low populations.

Next trip?
I have a few in the works. Within five years I plan to live in my van for a year and circumnavigate North America. Before then you'll likely find me doing a little more in-depth exploration of British Columbia's interior or down South basking in the sun on a beach in Baja.

Favorite thing about Ridgemont?
The "all-applications" usability of the shoes. I wear my Monty HI's everywhere and at all times, including most of the hikes I do. I only recently exchanged my Monty's for a boot when they became too wet and covered in thick, wet clay to wear into my truck, but as soon as things dried out, back on went the Monty’s.